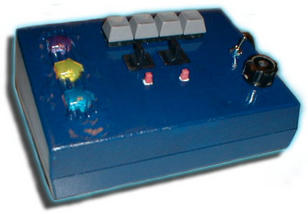 $0.99US Elmo guitar, discovered at Goodwill Industries in Portland. The default in-store sounds were pretty raw, mostly due to the low battery state. I assumed it had at least some kind of potential. It looked a little bit like this

but smaller, redder, and with star shaped buttons instead of character faces. Obviously, I forgot to take a pic of the unharmed machine...but you get the picture.

Of course, "lubemole" is a silly anagram.

None of these are really unique or amazing, but they can sound pretty decent. I mostly enjoy the very slow digital scrapings and/or loopy modes.

The battery compartment and guitar "neck" were kept over from the original device, but mounted (poorly) on the new housing. A glossy blue hand paint job finishes the look. There's left over space on the front panel for a logo or stencil of some kind.

Here are some lubemole images for your viewing pleasure. Click on a thumbnail for a closer look. The first set shows the lubemole in the development/dismemberment stages...

and the second set shows the completed device from various perspectives:

All samples were recorded directly from the lubemole's line out jack directly to the line input of a SoundBlaster card. All tracks were performed raw, solo, one take, with no effects added.

The first two samples demonstrate what the device sounded like prior to modification:

The following 3 are brief ad-hoc solo pieces after modification. Most of the bends are represented: