nzb based nntp/usenet downloader in perl

Novermber 25th, 2006 - Still kicking. Just wanted to let people know that although there hasn't been a release in the better part of a year now, I still consider this project active. I've been silently banging away on the 0.7.x version and hope to have a source repository available in the near future.

Sneaking out the new version before the turn of the year. This will be the last release in the 0.6.x series, and it now supports disk free space checking and several important bug fixes. As usual, the changelog has gory details, and the summary is:

The next release will be in the 0.7.x series and will be geared at allowing connections to work on the same file (smaller units of parallelization).

There are some important bug fixes, so upgrade is recommended!

Thanks to google, nzbperl now has an email list. To subscribe, send a message to nzbperl-subscribe@googlegroups.com. The group should now be used for most nzbperl related discussions, bug reports, questions, feature requests, etc.

The 0.6.6 version released earlier today had a silly bug. If you downloaded it earlier today and see a problem about --queuedir requiring an ABSOLUTE path, please re-download. It should be fixed now. Sorry for the hassle.

The major improvements/changes are:

Aug 9th, 2005: Once again, I released a broken version. 0.6.5 had a problem with --config not working, but I've changed it in place...so please re-download 0.6.5 to get the fix. I suppose it's a typical situation where a program's complexity reaches a certain point and the developer can't test it all. So...if anybody wants to write a suite of unit tests, it sure would be nice. :)

{there are older announcements, but I haven't built a nice way to view them yet}

Run Linux (or OSX or Windows)? Need a multi-connection newsreader utility that can process an nzb file and autodecode and even do bandwidth throttling? You've come to the right place. :)

I looked around for something that I could use for nzb files on my Linux setup, and I soon discovered limited options. There are progs out there that will download nzb files (nzbget and knzb are apparently the most visible ones), but none seemed to have a key feature that I put importance on: bandwidth throttling. So, like many other one-off hacks and open source projects, this little toy was built to scratch an itch.

This has currently been tested and confirmed working with Debian, SuSE, RedHat, NetBSD, OSX, and Windows (via Cygwin). There's no obvious reason this shouldn't work with other platforms or distros. Feel free to send me your success or failure stories.

UUDeview - great program, used by nzbperl to do file decoding.

On most systems, installing Perl modules from CPAN is a snap (as root):
$ perl -MCPAN -e "install XML::DOM"
(as an example)
See the CPAN faq for more information.

If you get a "Malformed UTF-8 character" crash on a Redhat/Fedora system, you may need to preface nzbperl commandline startup with a "LANG=C" like:
LANG=C perl nzbperl.pl

For now, you just get the --help summary...although most things are pretty self explanatory. Detailed explanations may or may not appear here in the future.

If all goes well, you'll see the main screen. You can press 'h' or '?' during normal operation to view the help screen which shows available key commands.

3 connections throtteld down to 25kBps 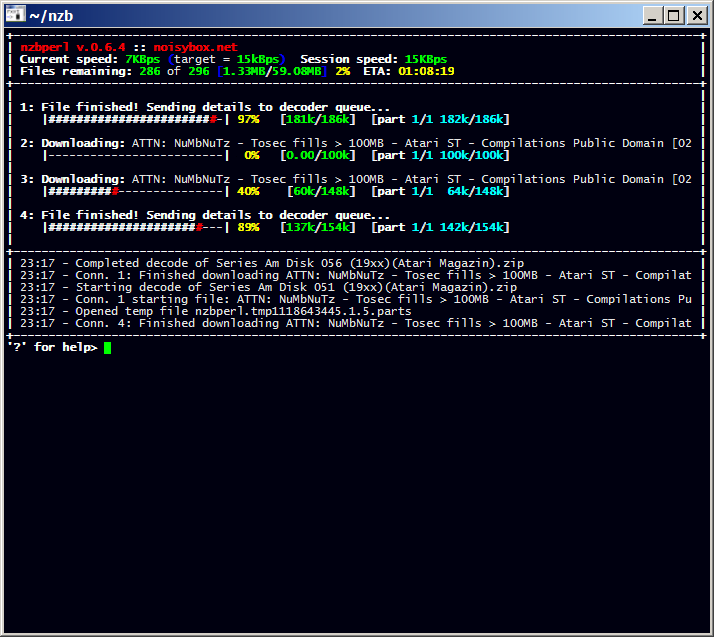 Running in Windows under Cygwin 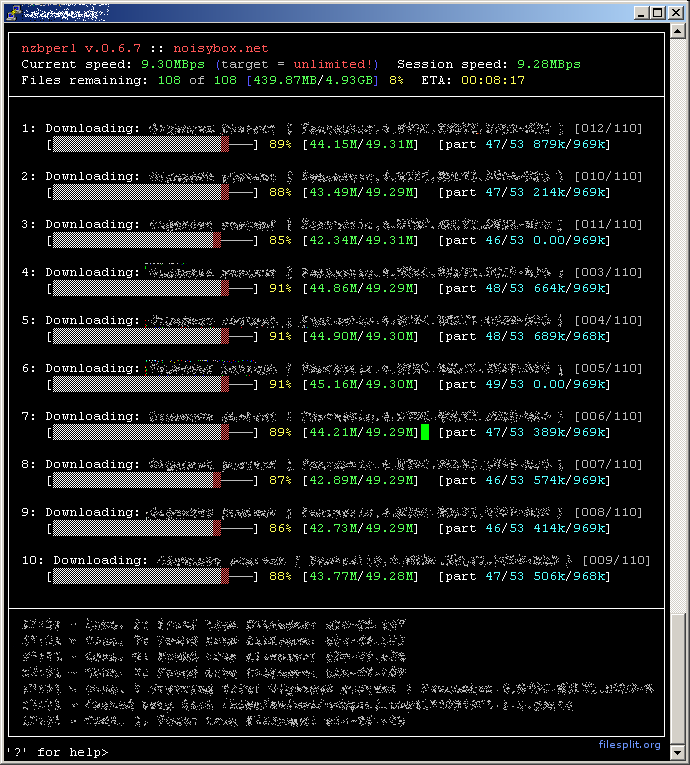 10 connections at 9.3 megabytes per second! 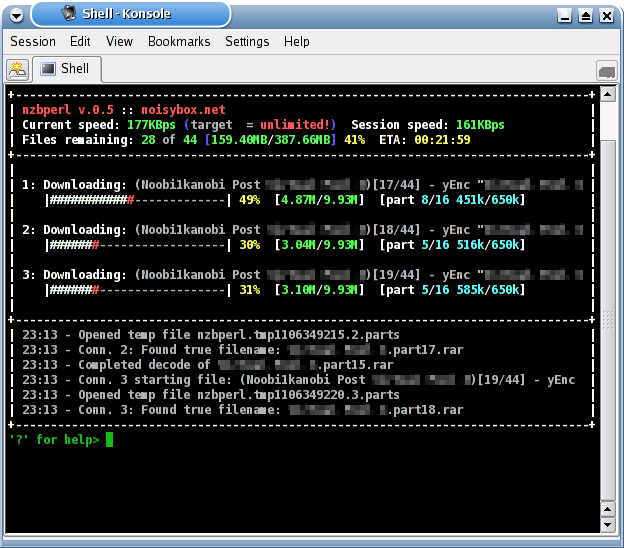 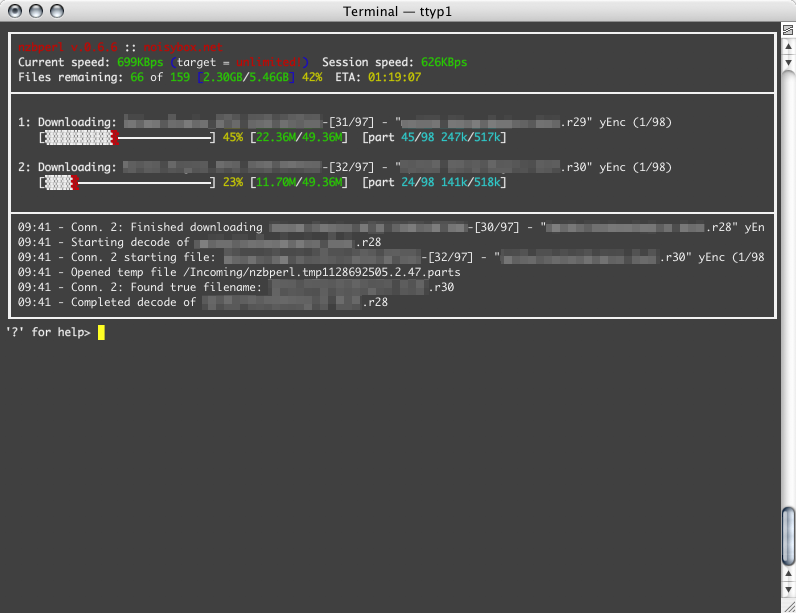 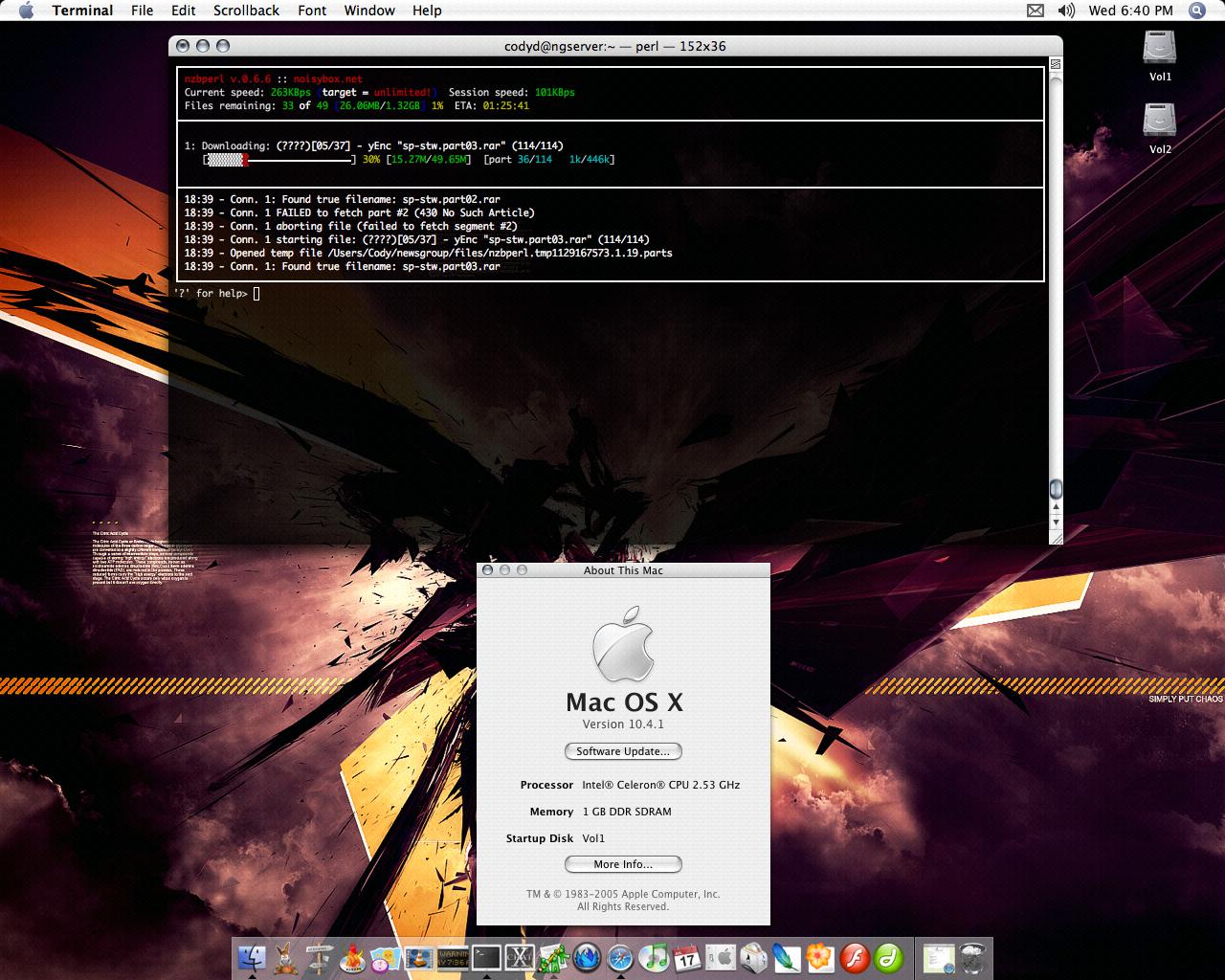 There's always room for improvement. The following is a list of things I may or may not get around to thinking about implementing. Items that have been implemented have been given strikethru and moved lower on the list.

This program is distributed under the terms of the GPL.

This program is free software; you can redistribute it and/or modify it under the terms of the GNU General Public License as published by the Free Software Foundation; either version 2 of the License, or (at your option) any later version.

This program is distributed in the hope that it will be useful, but WITHOUT ANY WARRANTY; without even the implied warranty of MERCHANTABILITY or FITNESS FOR A PARTICULAR PURPOSE. See the GNU General Public License for more details.

You should have received a copy of the GNU General Public License along with this program; if not, write to the Free Software Foundation, Inc., 59 Temple Place - Suite 330, Boston, MA 02111-1307, USA.