This week's "homework" for the experimental music course was pretty deep and had 5 possible assignments. One of these was to compose and record a short piece of music using only percussion (using techniques covered in class).

I'm not really a percussionist, so this seemed like a good challenge. Here is the final recording of what I ended up putting together this afternoon. Give it a listen while you read about the process below.

I think I remember my brother telling me that he was in the music program at the University of Oregon with Ches Smith, and that Ches used to gig with a sawblade used as a crash or a bell or something. Since much of our course material involved really nice shiny percussion instruments that I definitely do not own, I figured I would still give it an honest attempt starting with this sawblade as inspiration. I had an old/used skill saw blade around, and started by suspending that from the rafter.

Initial experiments showed that it sounded pretty good and had a nice ringing bell sound. When a playing it close to the microphone, however, the swinging and spinning made it pretty hard to capture the sound. I ended up adding a second tie to prevent it from rotating, and that helped a lot.

I also suspended a piece of sheet aluminum that have cut up previously for making eurorack faceplates. I didn't want to drill holes in it, so I first tried to compression fit two nuts on a bolt on either side. That failed horribly and quite dangerously. :) I instead used needle-nose vice grips and suspended it via that. The rich gong sound from a simple flat rectangular piece of aluminum was pretty surprising (to me)!

I also had the brass frame from a decorative air plant holder that a friend had gifted me several years ago. That was already hanging in the shop, so I used that as well since it had a nice triangle sound. 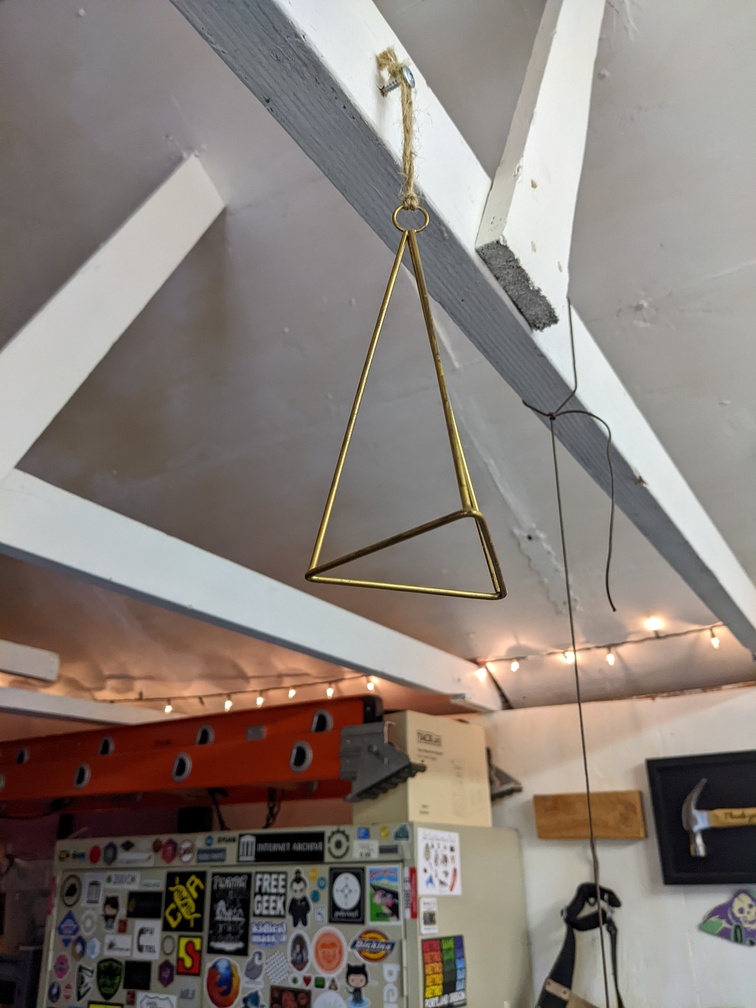 I think I recorded like 14 or 15 tracks and ended up using these final 11:

Aside from some pretty flagrant reverb on the sticks and a couple level adjustments, everything is just as I recorded it -- no edits, all timing mistakes are mine to own. As such, it is raw and could certainly using some mixing/equalizing at the very least, but I'm really happy with how it turned out.

Future improvements -- with more time, I hope to do some more experimentation with the sawblade, perhaps figuring out how to mount horizontally more like a cymbal. I will also experiment with adding loose screw/nut combinations to the blade to add some rattle or odd dampening. I think there is a notable lack of low-end bass in this work, and I've long wanted to experiment with tubular bass cannon type drums...so that would be another future experiment.

It was also clear from this experiment that the microphone I've used is wrong for this type of work. It's much much too directional and lots of tone was lost as the instruments changed their position or rotated. Something with a broader direction could have compensated for and possibly maintained some of the interesting tonal changes that were happening as things moved around (this was lost in process).

That's it for now. More homework later this week or next week!