This year, World Listening Day was on Saturday, July 18th, 2020. The global SARS-CoV-2 pandemic and civil unrest (caused by social injustice) have dramatically altered the world. I thought it would be interesting to try and recreate the soundwalk I did last year in hopes of making a recording that could demonstrate a sonic contrast.

In order to be more faithful to the previous recording, I took the liberty of doing the soundwalk on Friday, one day before the actual official World Listening Day. I met up with my colleague Wes downtown at noon, and we wore masks and stayed outdoors and socially distant. There were a few surprises along the way. 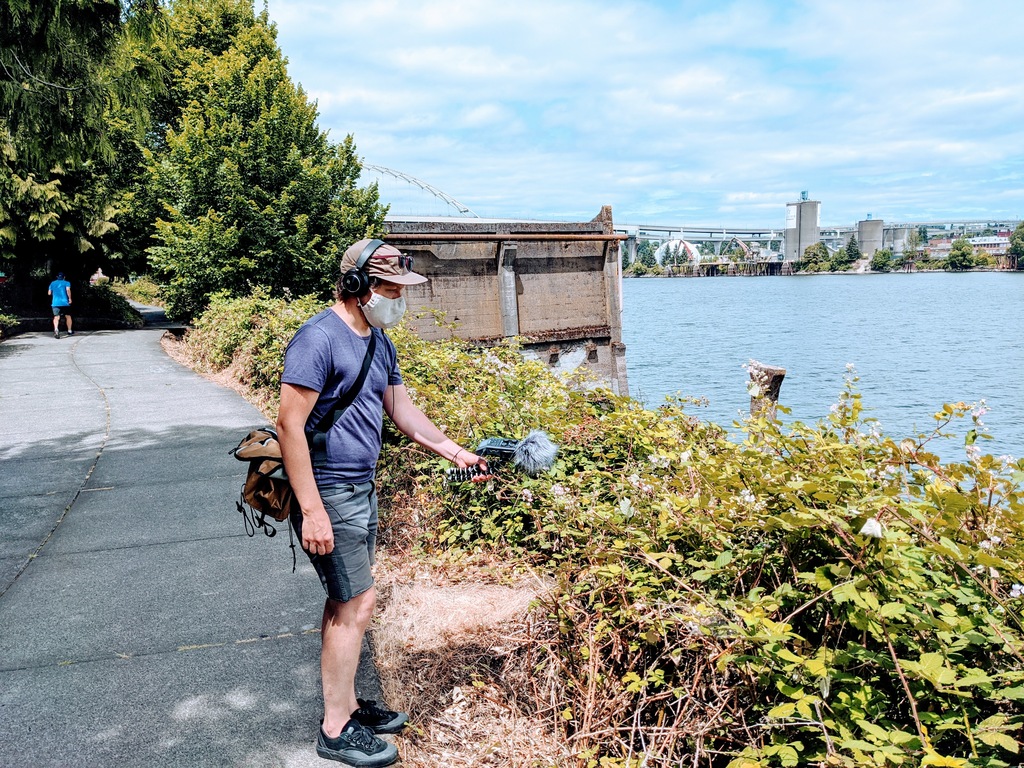 First, the wind was considerably stronger than prior years. I decided to try the windscreens that came with my in-ear binaural microphones, but I wasn't sure how they might be impacting the recording volume (plus, it was just really quiet downtown). Once we were walking for a few minutes, the wind really wasn't that bad and I'm not entirely sure how necessary the windscreens were (although they probably helped). The recording did end up being quite quiet, so I applied a constant 15dB amplification, which I think sounds pretty good but maybe calls up the background hiss/noise floor a bit more than I'd have preferred.

Second, the route I chose last year winds along the Willamette river via a stretch of private greenway (shared use path). Sadly, this year the path was closed due to construction in parts and covid-19 concerns. We ended up with more sidewalk time than I had hoped, which probably makes contrasting with the prior year more difficult. The upside, however, is that we got to find and explore some interesting new spaces, like a parking lot under the Broadway bridge. Ultimately, this detour caused us to be out recording longer, and we captured closer to an hour (compared to 50 minutes last year)

During our walk, I found it harder than usual to concentrate on my intentional listening. The sights and sounds of the city seemed more alien than they normally would, and so my mind was easily distracted and my focus drifted. While this is normal for me (and probably for most) during soundwalks, I found the sense of distraction elevated from previous times (especially visual distraction). Every new bit of graffiti seen brought me back to thinking about our current crises. I tried a new technique of purposefully "softening my gaze", and I think it helped fair amount. Before today, I genuinely didn't know that this was an actual thing, let alone that it's leveraged in Buddhism, anxiety therapy, and yoga (drishti...which I have unknowingly used both in eagle pose and while track-standing on a bicycle).

This is a binaural recording, so good stereo headphones work best. Click here to visit the archive.org page for this recording or just listen to it here: