The Church of Robotron has been working hard to find the mutant savior and to train members of the last human family. We had an opening on Wednesday, and my friend Zach edited together this fantastic video:

Here's a test video I shot of oscule's much improved jacob's ladder...it's terrifying:

If you have not yet been tested, please join us on First Thursday, October 2nd, 2014 at Diode Gallery for indoctrination, testing, anti-robot training, propaganda distribution, and some good old-fashioned street devival.

The midi controller I posted earlier was used to great depth in the missile silo performance that CRM114 Discriminator gave at toorcamp.

I built this little midi controller to trigger samples and control a few Pd parameters:

It's based on an old touchtone telephone keypad, a rotary encoder, a two digit LED display, and a USB-based AVR breakout board (the Teensy++). The PC board was hand-etched at home, and it's mounted in a solid white, repurposed jewelry or makeup box, purchased at the Goodwill. Click the above to view more images, read the brief technical spec, and to download the code and circuit/pcb design artifacts.

Just a quick peek at the first set of 3 kolpxnty boards that I had fabbed: They are not without problems and have not yet been instructed to bend the circuit things, but they will soon. The above is being driven from Pd via MIDI by way of Benito.

So my pal Mykle has done this EPIC event called LIGHTBAR to cheer people out of their seasonal affective disorder during February in Oregon. If you can't see the victory in building a GIANT and BRIGHT bamboo-event-party-dome, by hand, in the middle of winter, then you need to be poked (with sharp bamboo).

A few of us from dorkbot PDX have been peripherally involved, even contributing some works.

My friend Brian and I collaborated on a light-based project dubbed the RETINAL TATTOO GUN. The concept involved a series of bright flashes intended to [temporarily] imprint iconic imagery directly into the retina with strong after-images (ghosts).

We had a semi-working prototype up at LIGHTBAR last weekend before it collapsed(!!!) this week. This iteration of the retinal tattoo gun was a pretty big technical failure, but it was a fun project and we have a nice foundation going forward.

The circuit I designed/built had a series of issues, the worst of which was some form of ground bounce or inductive jibber jabber that caused all 8 flash channels to fire when any of them fired. Turns out that yeah, it's nontrivial to sequence a bunch of disposable camera flashes.

The day of installation we also found out that the repurposed viewmaster switch was connected in a way that caused the flashes to trigger when the advancer jobby was directly in front of the slide...so most of the light power was dampened. Whoops, doh!

We hope you enjoy the above image, and we hope to have something dangerous, compelling, and electrical to mount to your face in the near future.

I've mostly finished the next phase of the kolpxnty board -- driving the thing from midi over usb from apps like pd (pure-data). In the above clip, a braindead pd patch is sequencing the bowels of a Barbie telephone children's toy without any additional circuit bending bonus points. My video recorder died, so the video was recorded in near darkness on my phone ("Sorry folks!").

The next phase is to see how it can switch in circuit bent components (pitch down resistors/caps, for example) and to shrink the board size before having it fabbed. I etched 3 more cracklebox boards at todays open dorkbot workshop. Didn't get them populated yet but will very soon...

Some of the tiniest soldering I've ever done

In the last week or two I've been doing some of the smallest soldering I've ever attempted.

It all started with the KOLPXNTY board I've been designing and prototyping. I won't dive into detail here (maybe later!?), but the basic goal is to trigger a fairly large number of circuit bent devices from a networked computer. 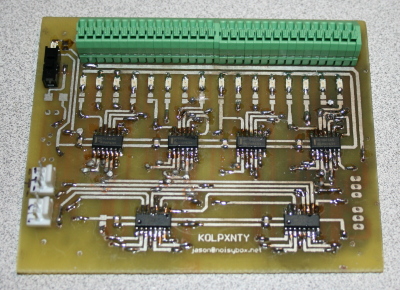 I'll put up a documentation page if/when it's more relevant.

Although this certainly not rocket science, it's certainly the most complex 2-sided surface mount board I've attempted to design. Briefly, there are a few buses, a lot of traces, and a shitton of vias (for my amateur hand anyway). I soldered down the teeny LEDs and 6 small SMT chips and the bypass caps and resistors and rested confident in knowing that even though the board was hand-ironed and soldered haphazardly, that it was good and efficient and tight.

Then I decided to finally build out the benito kits that I scored from Dorkbot Don a month or longer ago. 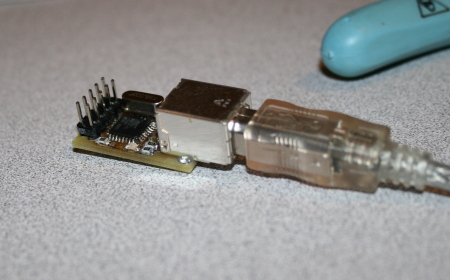 Let's be clear -- this shit is pretty damn small. It's not exactly microscopic. It's still hand soldered, but wow, it's really tight. The TQFP part is really hard not to bridge, but the braid will save you. The LEDs are really light and challenging, but totally doable if careful. The remainder of the SMT parts (caps and resistors mostly) are surprisingly fun to mount and actually save you the trouble of cutting those long leads (like on thru-hole parts).

I built two of them and although I managed to ruin one of the LEDs on one of the boards, I have been able to confirm that they're both functional.

Don has really done some great and amazing work here!

Let's be absolutely clear: He's designed and built us a cheap and readily available platform that can act as a usb-to-and-from-serial bridge, an Atmel programmer, or even more generally, a really great cheap and open platform for USB+AVR hacking. Wanna control a servo? Sure, this can do it! Wanna read from an SPI sensor? Sure, this can do it too!

It's still probably in need of some general purpose cross-platform code and reusable modules, but what a great small, cheap, and efficient platform on which to build computer-enabled projects! It think it was nearly ten years ago that I read about the death of the serial port and the future of this newfangled USB thing.

It was a hobbyist nightmare. How were (are?) we going to deal with the insanity? Other than the overpriced FTDI chip (not to fully knock it -- that chip is great), the benito is the first real usb platform that does what we hobbyists kinda want. Granted the software has to be there to support it -- and it will follow soon. Pay attention. :)

On Sunday, I hosted a circuit bending workshop called "Haywire" with Dorkdbot Portland at PNCA. There is some more detailed information over here and I have posted some pictures over here and added them to the DorkbotPDX flickr pool.

Overall, things went really well! There was a sizable turnout (35 or 40ish benders) and most seemed to really be enjoying the workshop. We encountered a hitch at the start involving lack of power and fire marshals, but things got rolling and people got into it. Although I forgot to start the recorder for my 30 minute introduction talk, I did record a couple hours of silly and chaotic ambient audio from the event. I hope to convert it to mp3 sometime soon and make it available online.

This was my first time putting on a workshop, and I certainly stood to learn a few things. Like:

I also probably should have prepared a few simple diagrams/tutorials that showed some basics, such as adding a line-out. Hopefully there will be a next time, and hopefully lessons learned will lead to a smoother workshop! Thanks again to everybody who signed!

So this past Sunday was the first "official" (more formal) DorkbotPDX event in Portland. I've been meeting with the group semi-frequently and really enjoyed seeing the first major event come alive. I gave a brief talk on the p5 glove controller as used as a sound controller with free/open source software...especially pure-data. I have slides and demo patches from the talk available here I had a real blast! Things went pretty smoothly for being a first-time event...and we're well positioned now to learn from our experiences and move forward toward great success. The momentum factor is a big thing IMO, especially during mid summer when people are on vacation or are generally more active...travelling, enjoying the outdoors. That's a big yearly theme in the NW -- sun comes out, people go out. We tend to get really busy during the summer. I'm slowly and surely working on building an audiopint, but I had to RMA the PSU, and so progress has been delayed. (crossing fingers hoping the problem is actually the psu). David has been super helpful in explaining some of their process and what the caveats/pitfalls are. I still don't have a great method of mounting things to the inside of the case/lid without poking through from the outside...but I'll likely resort to JB weld or a plastic weld to hold in brackets/bolts so things can remain secure. More updates on that project as it progresses...

Last weekend, PARTS (the Portland Area Robotics Society) held its PDXBot.07 event at at hotel space in Portland, OR. Even though the space left something to be desired (the noise bed was sometimes nearly unbearable and the layout made it easy to confuse vendors with dorks), the thing was a lot of fun!

have a set of photos and short movies available here.

By way of Dorkbot Portland, my nonsensical quickcam-on-a-chip-with-antenna design thing was used pretty ubiquitously at the event. It was fun to see it on shirts and signs and similar. As a co-overlord now of Dorkbot Portland, I ended up becoming a judge and stand-in MC for the artbot events (both junior and adult). I enjoyed talking in front of an audience again, even though I was completely unprepared and just stuck to the accidentall-odd-guy-in-shades persona I adopted [after waking up with a harsh red spot on the white of my left eye again]. I'm not too cool for school...I was saving you from disgust factor nine.

In any case, Don's robot turned out nice...it was fun to see it come together at the last moment. Great platform, rushed software. :) My creation didn't get finished (I ran out of time), but hopefully I'll have an entry when (if?) we do it again next year. Something about a power struggle between feeder insects.

I have started ordering/assembling parts to build my own audiopint, which is probably several bazillion times better than rolling with a laptop. All I really want is a portable pd capable device that I don't have to think much about....although I'm sure I will overwork and over-analize things.